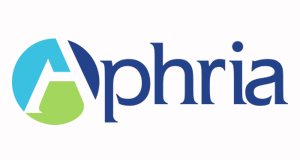 LEAMINGTON, ONTARIO--(Marketwired - Aug. 18, 2016) - Aphria Inc. ("Aphria" or the "Company") (TSX VENTURE:APH)(OTCQB:APHQF) is pleased to announce it has closed its short form prospectus offering, on a bought deal basis, including the exercise in full of the underwriters' over-allotment option. A total of 17,250,000 common shares (the "Shares") of the Company were sold at a price of $2.00 per Share, for aggregate gross proceeds of $34,500,000 (the "Offering"). The Offering was underwritten by a syndicate of underwriters led by Clarus Securities Inc. and included Sprott Private Wealth LP, Mackie Research Capital Corporation and Cormark Securities Inc. (collectively, the "Underwriters").

The net proceeds of the Offering are expected to be used in connection with the Company's ongoing expansion of Aphria's production capabilities beyond its ongoing "Part II Expansion", including the planning, design, development, construction and implementation of a project internally identified as "Part III Expansion". It is currently anticipated that Part III Expansion is expected to commence during the Company's second quarter, but remains subject to the approval of the Company's Board of Directors ("Board"). Until approved by the Board and deployed by the Company, the net proceeds of the Offering will be held as cash balances in the Company's account or invested at the discretion of the Board.

The Shares were offered for sale in each of the provinces of Canada, other than the Province of Quebec, by short form prospectus, by way of a private placement in the United States, and in those jurisdictions outside of Canada and the United States which were agreed to by the Company and the Underwriters, where the Shares were issued on a private placement basis, exempt from any prospectus, registration or other similar requirements.

This news release does not constitute an offer to sell or a solicitation of an offer to buy any of the securities of Aphria Inc. in the United States, nor shall there be any sale of the securities in any jurisdiction in which such offer, solicitation or sale would be unlawful. The securities offered have not been and will not be registered under the U.S. Securities Act or any U.S. state securities laws and may not be offered or sold within the United States or to, or for the account or benefit of, U.S. Persons unless registered under the U.S. Securities Act and applicable state securities laws or unless an exemption from such registration is available.

Aphria Inc., one of Canada's lowest cost producers, produces, supplies and sells medical cannabis. Located in Leamington, Ontario, the greenhouse capital of Canada, Aphria is truly powered by sunlight, allowing for the most natural growing conditions available. Aphria is committed to providing pharma-grade medical cannabis, superior patient care while balancing patient economics and returns to shareholders. Aphria was the first public licenced producer to report positive cash flow from operations and the first to report positive earnings in consecutive quarters.

CAUTIONARY NOTE REGARDING FORWARD-LOOKING STATEMENTS: Certain information in this news release constitutes forward-looking statements under applicable securities laws. Any statements that are contained in this news release that are not statements of historical fact may be deemed to be forward-looking statements. Forward-looking statements are often identified by terms such as "may", "should", "anticipate", "expect", "believe", "intend" or the negative of these terms and similar expressions. Forward-looking statements in this news release include, but are not limited to, statements with respect to internal expectations, the use of net proceeds of the Offering, intended expansion of the Company's facilities, its costs and anticipated timing with respect to such expansion, expectations of Health Canada approvals and expectations with respect to future production costs. Forward-looking statements necessarily involve known and unknown risks, including, without limitation, risks associated with general economic conditions; adverse industry events; marketing costs; loss of markets; future legislative and regulatory developments involving medical marijuana; inability to access sufficient capital from internal and external sources, and/or inability to access sufficient capital on favourable terms; the medical marijuana industry in Canada generally, income tax and regulatory matters; the ability of Aphria to implement its business strategies; competition; crop failure; currency and interest rate fluctuations and other risks.

Readers are cautioned that the foregoing list is not exhaustive. Readers are further cautioned not to place undue reliance on forward-looking statements as there can be no assurance that the plans, intentions or expectations upon which they are placed will occur. Such information, although considered reasonable by management at the time of preparation, may prove to be incorrect and actual results may differ materially from those anticipated. Forward-looking statements contained in this news release are expressly qualified by this cautionary statement.

Neither the TSX Venture Exchange (the "Exchange") nor its Regulation Services Provider (as that term is defined in the policies of the Exchange) accepts responsibility for the adequacy or accuracy of this release.